Plant Holds On Against Strawberry Crest To End Two-Game Skid 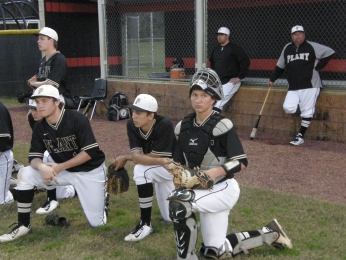 Catcher Conner had a good night with a with a triple and a sacrifice and a run scored.

On a beautiful night for baseball with temperatures in the low 70’s the Plant Panthers came out even hotter. They used the sacrifice to perfection to take down the host Strawberry Crest Chargers in a 3-2 win.

Plant scored the third run of the game on a triple by catcher Conner Scott and a sacrifice fly by right fielder A.J. Hubbard that gave them a 3-1 advantage. With the Panthers playing confident through five innings, that was just enough offense that they needed to take the game from the Chargers (6-2).

”We were able to hit the ball tonight,” said Plant Manager Dennis Braun. “It was a tough game, and it ended our two-game skid.”

The Panthers (5-3) started things off in the first inning with a single by second baseman John Shields. Shortstop Nick Cerrelli sacrificed Shields to second on a ground out to Panthers third baseman Damian Torres. Shields stole third base and scored on a sacrifice fly to deep right-center field by Conner Scott.

Strawberry Crest tied the game in the bottom of the second inning on a solo home run from center fielder Korey Coffee. Coffee caught a letter-high fastball over the plate and slammed it over the left field fence with plenty of room to spare from Plant pitcher Zane Hedaya.

That was all Hedaya gave up, pitching with well-placed fastballs and a diving breaking ball. Hedaya pitched five complete innings, giving up one run on only two hits and two walks.

The game remained tied at one until the fourth inning, when the Panthers added a run to take a 2-1 lead after left fielder Davis Bak reached base on an error. Bak advanced to third on a single by designated hitter Leo Oshinski, and scored on the second single of the game from Shields.

Strawberry Crest started right-handed pitcher Matt Trzeciak, who pitched into the top of the fourth inning and had two outs when he was pulled for right handed pitcher Wesley Tanner. The Chargers bats just could not get going enough to take the game away from the Panthers. The Plant pitching worked well through seven innings to keep the hot-hitting Chargers from breaking the game open.

“We have been successful this year with seven seniors,” said Chargers Manager Eric Beattie. “But we also have freshman stepping up too.”

Right-handed pitcher Tyler Powell took the mound in the sixth for the Panthers. Powell gave up a hit to designated hitter Ben Pues, who scored after a single by Christian Young. Strawberry Crest tried to tie the game but the Plant defense would have nothing to do with that as they threw out Korey Koffey at home plate trying to score on a wild pitch.

Plant brought in the third pitcher of the night with right-hander Ethan Richards. Richards shut down the Chargers in the bottom of the seventh inning to preserve the win for the Panthers.