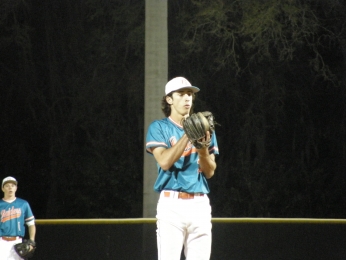 The Plant City Raiders kept their win streak alive by earning their fifth in a row on Thursday, downing host Strawberry Crest 9-3. They did so by dominating the Chargers at the plate and on the mound. A large crowd was on hand to witness this battle between two teams who are separated by only a few miles from each other.

The Raiders (7-3) took advantage of small ball at it’s best and a few miscues by the Chargers defense. This game was a lot closer than the final score suggests, but Plant City got it going at the perfect time to capitalize and change the outcome.

In the third inning the Raiders exploded for five runs. Right fielder Peyton Collins started off with a single and he then stole second base. He went to third on a sacrifice bunt and then scored on a throwing error when Dylan Robinson hit a hard grounder in the infield that also scored Dalton Wingo on the error.

That made the score 3-0 but the Raiders weren’t done yet. After a walk to first baseman Cory Cotnoir and a base knock by Palestrini, followed by back-to-back error’s, the Raiders plated three more runs to make the score 6-0 in the third inning.

“We used the small ball today and it worked to our advantage,” said Plant City manager Michael Fryrear. “Our pitching was able to shut down the Chargers as well.”

In the first inning center fielder Dalton Wingo reached base on an error by the Raiders defense he scored two batters later on an RBI double by left fielder Dylan Robinson.

Brandon Harris led off the Chargers’ half of the first with a double to right field, but was left on third base after the Chargers were unable to get anything else going against Plant City starting pitcher Nick Palestrini. Palestrini pitched the first two innings of the game for the Raiders and he allowed only one hit with three strikeouts for his time on the hill. A the plate was a bigger story for Palestrini, as he went 3-for-4 on the day and also crossed the dish two times. 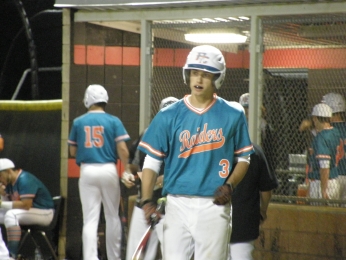 In the top of the fourth inning Plant City added another run on a double by Peyton Collins. He scored the seventh run for the Raiders after advancing to third and Robinson came through again with a sacrifice bunt to score Collins from third base and give the Raiders a 7-0 lead.

Plant City was not done yet, scoring two more in the top of the fifth inning. Cotnoir walked and advanced to second on a wild pitch, and then scored on the third hit of the day by Palestrinti. The pitcher was pushed to second on a sacrifice bunt by infielder Brendon Shultz. Palestrini scored the second run on a single by Wingo.