The running game was the key to the Blue Devils’ offense, recording eight steals, two strikeout throws to first that scored runners from third, and a beautiful safety-squeeze by Dustin Baber that scored Brice Giles from third.  Baber was 3-for-4 on the night, including a double and two stolen bases.

Winter Haven senior pitcher Tobias Myers took a perfect game into the sixth inning against the Lake Gibson Braves Friday night.  The hit that broke it up was a high hopper over his head off the bat of the Braves’ Ben Johnson, who beat the throw for a single.

“I was thinking about it,” Myers said of the possibility of a no-hitter.  “I wish it was out in the trees, instead of an infield single, but that’s all right.”

Myers threw six strong innings, striking out ten and giving up three hits in the 8-2 victory.

The rest of the team was thinking about the no-hit prospect as well, Rougie Odor admitted.

“We had to say something about it.  But the baseball gods kind of took advantage of it,” Odor said.

The senior center fielder was a catalyst for the visiting Blue Devils, walking and scoring the team’s first run in the first inning. He finished 1-for-2 and scored twice.  He also swiped a base, providing everything a manager wants from a leadoff hitter. 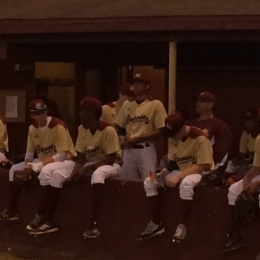 Lake Gibson players hope for a spark against Winter Haven.

Winter Haven manager Al Labozetta was pleased with Myers’ performance. He also did not mind that the no-hitter was broken up and he was able to manage his hurler’s work.

“His pitch count was real low, but we went ahead and got Casey Thomas in there in the seventh.  No need to push it if you don’t have to,” Labozetta said.

“We just have to play better defense,” said Lake Gibson manager AJ Diaz, referring to his team’s four errors that led to three Winter Haven runs.  “We just have to get healthy and get back to it.”

After five 1-2-3 innings to start the game, Johnson finally came through with the infield single to break up the no-hit bid, but promptly got picked off at first base.  Then, with one out, Zach Carter beat out a dribbler on a check swing for the Braves’ second hit.  Kenny Espinosa then singled, but Lake Gibson was unable to score in the sixth.

The three hits were, however, enough to prompt a pitching change for Winter Haven in the final inning, and Lake Gibson took advantage.  Will Rhodes, who started the game on the mound, walked to lead off the seventh.  Carmine Romano then slapped a single to left that was misplayed and rolled to the wall.  Rhodes scored on the play, and Romano was able to reach second.  Ryder Southy followed with a line drive to center that brought Romano around to score.

Casey Thomas then retired the next two hitters to finish the game.