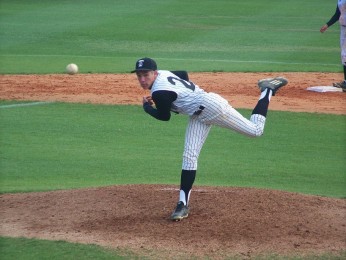 Senior catcher Luke Kelly showed of his arm as well, gunning down three would-be base stealers in the contest.  Kelly added a 2-for-2 performance at the plate, with a double, a walk  and an RBI single.

The Thunder (6-6) left eight runners on base in the course of the game, but the shutout by Euverard made it a moot point. Lake Region combined for seven hits off of Panthers pitchers Zach French and reliever Tito Valdivia, both of whom threw three innings. French was saddled with the loss, giving up three earned runs.

“Yeah our sophomore lefty, Euverard, he did a great job, and we made the plays behind him,” Thunder manager Bill Bullock said.  “On offense, we just tried to move guys around, into scoring position.”

After Carson Euverard struck out the side in the top of the first, Lake Region got on the board quickly.  Senior center-fielder Bradley Beresford walked with one out, then stole second.  Luke Kelly then worked a walk and both runners moved into scoring position on a wild pitch. Austyn Walters followed with a deep fly ball out to right that scored Beresford, giving Lake Region a 1-0 at the end of the first inning. 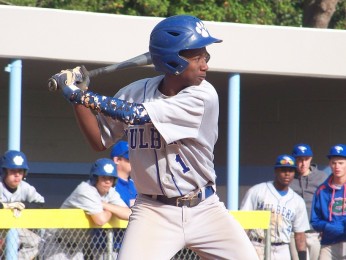 After a scoreless second, Bullock employed small-ball to move runners around in the third.  With one out, Orlando Pena dropped down a bunt and beat it out for a base hit.  After Pena swiped second, Beresford hustled out a bunt base-hit of his own, moving Pena to third.  Pena then scored on a wild pitch, and Kelly slapped a single to right to score Beresford.

The Panthers (3-11) mounted a rally in the top of the fourth, with Orlando Rodriguez reaching first on a bunt single.  Rodriguez swiped second, then moved to third on a single to right by Dylan Crenshaw.  Crenshaw took second to put two runners in scoring position, but the Panthers failed to capitalize.

“We made a lot of mistakes on the base paths today. We have some guys who were over-aggressive,” Mulberry manager Kenny Kelly said, citing the three runners picked off and the three caught stealing.  “We just need to settle down and play baseball.”