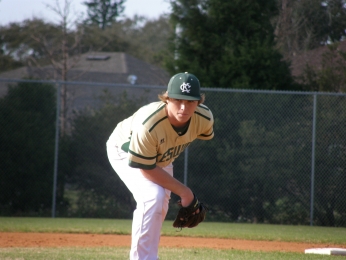 The Crusaders put on a dominating performance Tuesday against Seven Rivers Christian in a 2A-5 showdown, winning the game 9-2 on a warm sunny day in the Tampa Bay Area.

The Crusaders sent senior left-handed pitcher Josh Guerin to the mound. He did not disappoint just as he has during the Crusaders undefeated season so far.

“My two-seam fastball was working very well for me tonight,” said Guerin. “I was able to get the movement I needed to throw it for strikes all game long.” Guerin set up his curve ball pounding the strike zone with his pitches for eight strikeouts on the day. He gave up only four hits to go along with two walks through six strong innings.

The Crusaders got things started in the fourth inning while sending ten batters to the plate to face the Warriors starting left-handed pitcher Parker Pillsbury. Designated hitter Nate Leathold reached first base on a throwing error by the Warriors infield. He was pushed to third on a double smashed down the left field line by third base man Tanner Suarez. After a walk to second baseman Zack Petchouka loaded the bases Leathold scored on another walk to left fielder Tommy Sampson to score the first run of the game for both teams.

With the bases still loaded, shortstop Nick Boesh was hit by a pitch to score the second run of the inning and keep the bases loaded. Petchouka scored when left fielder Josh Paulton reached base on an error by the infield to score Suares from third base to make the score 3-0 in the first . The Crusaders were not done scoring in the fourth yet, they scored two more runs on an RBI single by center fielder Will Kirkpatrick. 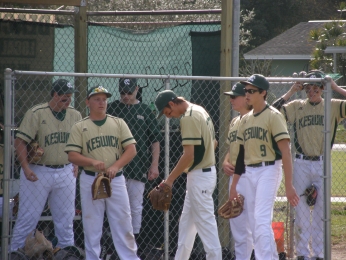 Seven Rivers got their scoring started in the top of the fifth when center fielder Tristian Volarios reached second base after an error on the outfield. He moved to third on a sacrifice bunt by left fielder Christian Shepard and scored on a throwing error by the Crusaders infield.

Tanner Suares got his second hit of the game with a single down the third base line, and he moved to second on a fielders choice. After advancing to third base on a wild pitch Tanner scored on another fielders choice by catcher Nick Berryman that gave the Crusaders a 6-1 lead. Left fielder Josh Paulton hit a single down the first base line and picked up two RBIs for his effort to give the Crusaders a 8-1 advantage in the fifth inning.

“We are playing loose out on the field and at the plate,” said Kenswick Manager Dan Samaritoni. “The senior pitching has been pitching very good and going deep in the games we have played.”

The Warriors (6-3, 4-2) scored their second run in the top half of the sixth inning when Pillsbury smashed a fast ball off the left center field fence, missing a home run by only a couple of feet. He stole third and scored on an error by the infield. The Warriors lost their second game in as many days. Starting pitcher Pillsbury pitched well, striking out eight batters on the night a few mistakes changed the game to the Crusaders advantage in this one.

“We’re still getting used to the new district set up,” said Warriors Assistant Manager Darren Pillsbury. “We have been playing good ball.”