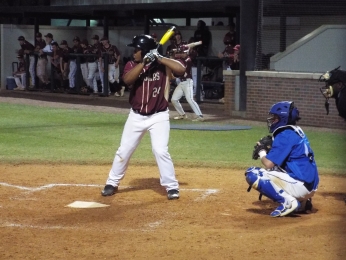 AJ Jackson reached base every time, going 3-for-3 and a walk.

Paul Straub Field played host to one of the most entertaining games of the year Wednesday as the undefeated Jesuit Tigers hosted the Countryside Cougars in a game that saw the momentum shift back and forth between the two squads. The Cougars built a late three-run lead only to see the Tigers storm back in the bottom of the seventh to tie the game.

However, in the eighth, the Cougars Josh Strickland came around to score the lone run of extra innings to propel the Cougars to the 7-6 victory, and the upset of the previously undefeated #1 Jesuit Tigers.

The Cougars (9-2) came into the game fresh off of snapping their first losing streak of the season. After a scoreless first inning from both teams, Countryside took the early lead in the second on a Nick Mudrey RBI single that scored Cameron Kroeger. The Cougars added one more to their lead before the inning was over.

McGuire Weaver cut the deficit in half for the Tigers (11-1), who came into the game scorching hot, having scored 23 runs just the night before. Entering the third inning, the Tigers again found themselves down a pair but once again cut the deficit to one on a Hunter Tubbs single to center field. The Tigers finally tied the game in the bottom of the fourth on a Weaver single that brought home Adam Weekly.

The Cougars re-took the lead in the fifth and added two more runs in the top of the seventh, and victory seemed inevitable. 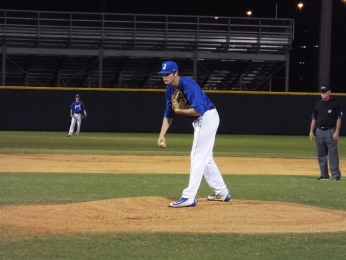 Tigers starter Drew Martin leans in for the sign.

Down 6-3 entering the bottom of the seventh, the Tigers got rolling with a Garrett Sheppard single to right field. Alex Mocny came in to courtesy run for Sheppard and four batters later, Nico Baldor singled to center field to bring home Mocny and Nick Ortega to close the gap to one. The Tigers tied the game at six on a Tubbs single to right field, sending the game to extra innings.

In the eighth, the Cougars got things going with a lead-off walk to Strickland. Two batters later, Strickland advanced into scoring position on a balk called on the Tigers pitcher, and then promptly was advanced to third by a Steven Wilson sacrifice. After Matt Adams was intentionally walked, Strickland made a heads up play and scored the go-ahead run on a wild pitch during the next at bat.

After a tough seventh inning, Jack Skantze came back out to the mound to close things out for the Cougars. Skantze showed incredible composure in the eighth, sending the Tigers down in order to secure the victory and complete the upset of the Tigers. Skantze’s performance in the eighth epitomized the increased maturity of the team that manager Kemo O’Sullivan mentioned when he spoke about his team’s victory.

“With this club its a maturity thing,” said O’Sullivan. “Two years ago we lose that game, we bury ourselves and everyone would be sulking afterwards.”

When asked about the teams mindset heading into this game, O’Sullivan had a quick response.

“We knew we could beat them, there’s no question about that,” said O’Sullivan. “We have had a few topsy-turvy moments but we know we have a good team that can compete.” 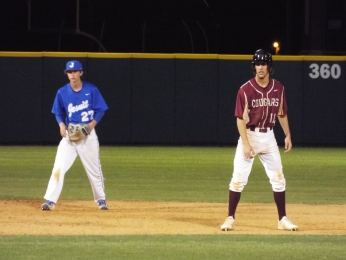 Matt Adams getting a sizable lead from second.

The Cougars boast an incredibly confident team that resonates through their coach and to the leaders of the team like Adams, who found himself all over the field Wednesday night. Adams echoed the pre-game message from his manager after the game.

The Tigers fall to 11-1, ending their undefeated bid. Although disappointed, manager Miguel Menedez couldn’t stress enough how proud he was of his team’s play.

“I told our guys, I was proud of our effort,” said Menendez. “We didn’t panic; we were down, we found a way and we fought. But, in the end, there were too many mistakes. You have got to give those guys credit though, they had a lot of good at bats and took advantage of those mistakes. At the end of the day its easy to quit and fold when you’re down 6-3 in the bottom of the seventh after giving up those two runs, but we didn’t do that. We fought and fought and had a chance. The good thing is, we play tomorrow.”