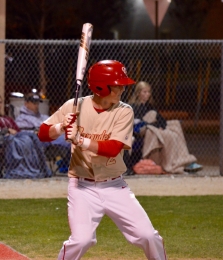 Clearwater Central Catholic had an offensive explosion to come out on top over 4A-4 district opponent Calvary Christian 10-8, ending the Marauders three-game skid.

It was all about the batters for both teams Thursday night, as each struggled on the mound and in the field. There were nine different pitchers used between the two sides and a total of 12 errors committed. Offense was the only thing working for both dugouts.

Despite the Warriors’ best efforts at the plate, the Marauder offense had the upper hand on the night, piling on 13 hits in all.

Clearwater Central scored all of their runs in the first three innings of the game. Shortstop Derek Smolenski started things off by taking advantage of a throwing error to score all the way from first base. Smolenski, kept the action going all night, going 3-for-3 with a walk and scoring three runs.

“I kept my eye on the ball all night; I waited for my pitch and I took it,” Smolenski said. “I also kept my eyes open for any opportunity and took advantage of a few miscues to score early.”

The majority of the Marauders’ runs came in the second and third inning. In both innings they batted around in the order. In the bottom half of the second, center fielder Patrick Purcell led off the inning with a single. The next five batters reached base and scored.

During the third inning, third baseman Michael Bessell had a monster double to the left-center gap that started the scoring. Bessel also had a huge night at the plate, going 3-for-4 with two RBIs.

“I knew exactly what I wanted to do when I got up to the plate, then I just did it,” said Bessell.

Clearwater Central Catholic Manager Todd Vaughan was very proud of his team for waking up offensively. But he says they still have some work to do defensively in order to be a complete team. 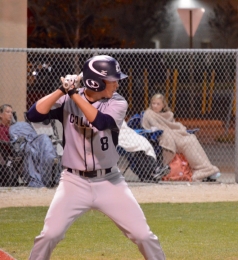 “We haven’t been scoring like that. I am really proud of how our guys waited for their pitch and took advantage of little miscues,” said Vaughan. “Defensively, we have got to clean that up. There were too many little errors.”

The Warriors also had a night of high-powered offense, scoring eight runs on seven hits. Second baseman Justin Bench scored in the top half of first inning for Calvary, tallying the first run of the game.

The Warriors’ batted around the order in the third and fifth inning, scoring three runs in each frame. The final run scored came in the top half of the seventh inning, but the rally was not enough for Calvary to overcome Clearwater.

“Seven, eight runs usually does it for you, but tonight it just wasn’t enough,” said Warriors’ manager Greg Olsen. “We still didn’t take advantage of all the opportunities, and defensively we just had a really off night.”

While offense was on display, it was a diving stop by Smolenski that ended the Warriors rally and claimed the win for the Marauders.