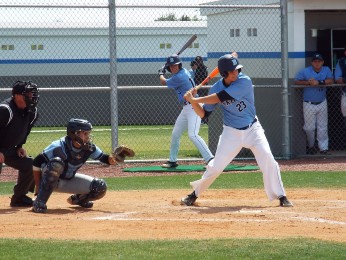 Buccaneers starter Tyler Fagler taking his turn at the plate.

The Panthers played the role of the home team against the Buccaneers and found themselves down two with six outs left, but Kenny Moreno-Costa sparked a three-run rally in the sixth that propelled the Panthers to a 4-3 opening-round victory.

The Panthers’ patience finally paid off in the sixth as they were able to get to Bucs starter Tyler Fagler. After Morena-Costa scored the first run in the second for the Panthers (13-3), they only managed one base runner in the middle innings. However, after back-to-back walks to lead off the inning and a well-executed double steal, the Panthers tied the game when a costly error on the Buccaneers infield opened the door for Derek Cartaya and Ricardo Leonett to score. Moreno-Costa’s second double of the game during the next at-bat brought home Luis Chavez for the go-ahead run, a lead they did not relinquish.

Panthers manager Onel Garcia acknowledge this was a different type of win for his team and how they had to do it, but ensured the message was simple.

“This year we’ve basically not had to come from behind at the end of games,” said Garcia. “We have been leading or, in the three losses, we were behind from the start. I told them we have to win different types of games, so stay with it and lets have a comeback win here. That sixth inning turned out to be pretty good. We got guys on base and we executed and put the ball in play and good things happened.”

Somerset has won four in a row and nine of its last ten.

“It feels great” said Moreno-Costa on coming through for his team. “I try to keep my team positive while we were down. My first at bat they gave me the pitch I was looking for and I missed the pitch in my second at-bat, in my third at-bat I got to him. I saw the pitcher three times, so I got to know him.” 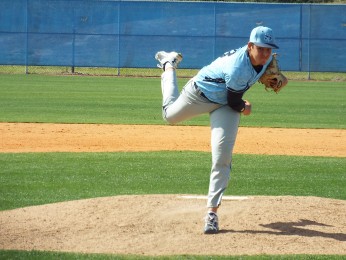 JJ Teixiera delivers a strike in the fifth inning.

The Buccaneers (12-2) scored the game’s first run in the second inning off the bat of Michael Hill. The base-hit scored Carson Weekly to give the Buccaneers the 1-0 advantage. The Panthers matched the Buccaneers run in the bottom half of the inning to tie the game. However in the fourth, after a line-drive triple from Julian Bosnic, a sacrifice-fly from Jack Khawly brought him in from third for the go-ahead run. The Buccaneers added another run in the fifth when Tucker Fine crossed the plate on a bases loaded walk to take the 3-1 lead.

Fagler started the game for the Buccaneers and was one of the main reasons the Panthers struggled early on offense. Fagler only allowed four hits and struck out seven batters in 5.1 innings of work.

After coming into the game in the fifth inning for the Panthers, JJ Teixeira returned to the mound with a lead and continued his impressive performance until an awkward follow through on a pitch knocked him out of the game. He threw 21 pitches over two innings, allowing no hits and striking out a batter.

“It felt good.” said JJ Teixeria. “In the bullpen I felt good but then got hurt a little bit out there. But we were lucky that we had Brandon Valentine to help us out and close out the game and win it.”

Valentine came in for the final two outs of the inning and locked them down to pick up the save and secure the victory for Teixeria and his team.

As for the Buccaneers, they suffered a tough loss against a really good team. Manager Richard Warren emphasized the fundamentals when referencing how his team will move forward. 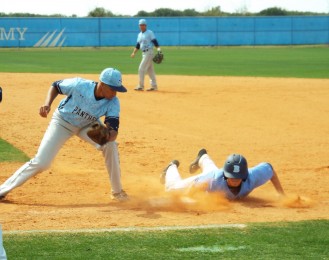 Tucker Fine dives in under the tag to avoid the out.

“We are all right,” said Warren. “We just didn’t do the little things and when you play a team that doesn’t stop for 21 outs, you have to make sure you do those things. It got away from us in one inning and when you play good teams you can’t have those innings.”

At the end of the day, Warren knew the importance of having his starter go several innings in a tournament where they play a game several days in a row. He expects that from his group of starting pitchers and if he gets more performances like the one Fagler turned in, they will be just fine.

“Our starters are averaging close to six to seven innings a game,” said Warren. “When you play in a game where the wind was a factor you have to throw the ball over the plate. I think his only two walks were in the sixth inning and lost the zone there for two batters, but that happens. We also had opportunities to get out of the inning but we didn’t execute.”