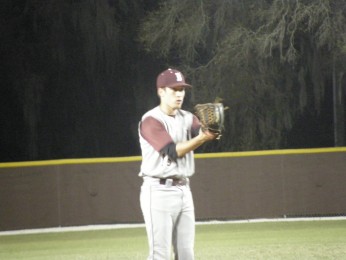 Antonio Velez gave up one run on two hits and struck out eight batters in a dominating performance.

On a very special night in Brandon, the Brandon Eagles started strong by controlling their game with the Leto Falcons and earning an 8-2 victory. Brandon High has been the tournament headquarters for the Saladino Tournament for over ten years, and will again host the finals for the 36th edition this season.

Perhaps the most popular and beloved tournament in the area, the Saladino Tournament prides itself on providing a quality, first-class tournament experience for baseball fans of all ages. With a patriotic, family-oriented and educational atmosphere, the ultimate goal is for everyone involved to make friends and create lifelong memories. The tournament was established in 1981 as a memorial for Tony Saladino Sr., and to promote high school baseball in Hillsborough County.

Saturday marked the opening day of play at four venues around the county, with four games each held at Brandon, Sickles High and Jefferson High, and two more at Pepin Stadium at the University of Tampa.

Saturday’s night game at Brandon also brought a historical moment in the esteemed tournament, when Yvette Leto drew a walk from Brandon pitching. Yvette is the great-granddaughter of tournament founders Bertha and Tony Saladino, and it was a great gesture the family wanted to do for their grandparents to pay tribute to Bertha, who passed away on January 24th.

Therefore Leto manager JJ Pizzio made a lineup change and inserted Yvette in for an at bat. She is the second female player to ever compete in the tournament, and is the only female to ever bat and reach base. The senior has the surname of her high school and played three years of varsity softball during her high school career.

“I think I’ll give up softball and start playing hardball,” Yvette Leto said.

The only other female to ever compete in the tournament was Durant knuckleballer Chelsea Baker, who won games over Lennard and Chamberlain in 2014 and 2015, respectively.

Of all the males on the field for Saturday’s nightcap, Eagles starting left-handed pitcher Antonio Velez also delivered a memorable performance. Velez struck out the first two batters Leto sent to the plate. That set a nice tone that held up over the first two frames, in which time his offense staked the University of South Florida commit with a comfortable lead.

“Our starter Velez is why we were able to take this game from the Falcons tonight,” said Eagles manager Matthew Stallbaumer.

Brandon (11-2) got on the scoreboard to take control right away. After getting hit by a pitch, left fielder Luis Casanas was the first Eagle to cross the dish when catcher Jerry Biller roped a double to the wall in left-center field that made the score 1-0 in the first inning. 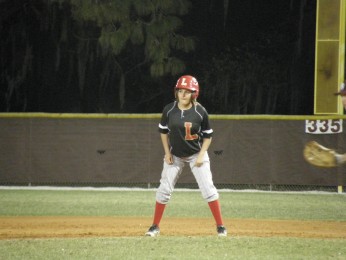 Yvette Leto became the first female player in the Saladino Tournament to ever bat and get on base, drawing a walk.

The Eagles struck again in the second inning after a bunt single down the third base line by right fielder Joe Schandera. He quickly went to second on an infield hit by third baseman Jack Hubbard. Schandera scored on a sacrifice bunt by designated hitter Gage Young. The Eagles scored two more runs in the inning when center fielder Tyrek Bell smashed a double over the center fielder’s head for a 4-0 lead.

“We graduated nine seniors from our team last year,” Pizzio said. “It’s hard to compete with a lot of teams when you have players coming up from the junior varsity team.”

Leto scored a run on a triple by right fielder Jose Martinez in the second. But Velez quickly rebounded and struck out the next two batters. That gave the Eagles a 4-1 lead going into the third.

The fourth inning was quiet for both teams.

The Eagles came alive once again in the fifth inning, using small ball once again to push the runners around the bases. Tyrek Ball singled to center field for his second hit of the game to start things off. He stole second and advanced to third when second baseman Teddy Flynn reached on an infield error. Left fielder Luis Casanas sacrificed Ball across the plate with a beautiful bunt down the first base line, with no chance for the Falcons infield to make any kind of play. Antonio Velez then helped his own cause with a well-placed bunt to push another run across the dish. Velez and Jerry Biller scored on a base hit by right fielder Schandrea to make the score 8-1.

Leto (2-8) scored the final run of the game in the bottom of the seventh inning after third baseman Jorge Carrero walked and scored on a wild pitch.

Tournament action continues on Monday and runs through the week leading up to Friday’s championship finale at Brandon.