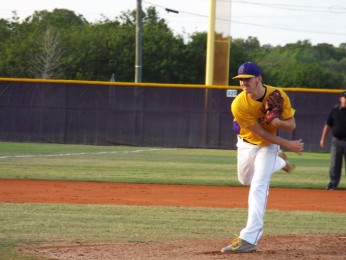 With spring break tournaments now in the rearview mirror, many teams are looking ahead to the final games of the regular season and gearing up for the playoffs. Two of those teams squared off Wednesday when the Lemon Bay Manta Rays (#5 SWF Rankings) traveled to face the Booker Tornadoes in a game that had a playoff-type atmosphere before the first pitch was thrown.

The Manta Rays trailed for most of the contest but rallied in the sixth to tie the game. Then, in extra-innings with the bases-loaded, Jake Underhill sent a ball past the infield to score Micah Davis for the 2-1 walk-off victory, snapping the Manta Rays seven-game winning streak.

The Tornadoes (13-5) jumped out to a 1-0 lead in the third inning when Ryan Heller came to the plate with two outs and sent a line-drive into the outfield for a double, scoring Hunter Johnson from second. The one run was nearly all the Tornadoes needed as they sent ace Micah Davis to the mound.

Davis came into the game sporting a 6-2 record and 67 strikeouts to go along with an ERA of 0.34, and he was every bit as good as advertised. After getting into a bases-loaded jam in the first, Davis settled down nicely and went seven innings, allowing five hits, one run and striking out 10. 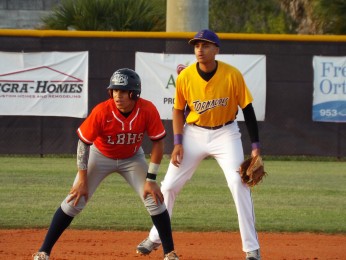 The Manta Rays (12-5) came into the game hot, having won seven games in a row, outscoring their opponents 58-15 in the process. Trey Fields pitched seven strong innings, allowing just one run on nine hits, striking out four. With Fields keeping the Manta Rays within one, the offense finally broke through in the sixth when Matthew Molinari hit a line-drive into the outfield for a single to score Jaryd Clary and tie the game 1-1.

Lemon Bay nearly began the rally an inning earlier when Flynn Stewart sent a ball down the third base-line destined for extra-bases. But the Tornadoes Cody Brown made a nice dive to trap the ball and then got up and delivered a beautiful throw across the diamond to get Stewart out at first.

In extra-innings, the Manta Rays nearly took the lead if not for another great defensive play. After an error on the Tornadoes allowed a ball to get past the infield, Jaryd Clary took off but was thrown out at home by outfielder Ryan Heller. The Tornadoes got out of the inning unscathed, and in the bottom half of the inning, after two intentional walks loaded the bases, Underhill singled and brought home Davis for the winning run.

“It feels great to be a part of this team,” said Davis. “This team is really rolling. We struggled hitting, the other pitcher did a great job, but it feels great to win regardless of how we do it. It’s great to have those kids behind me doing what they do.” 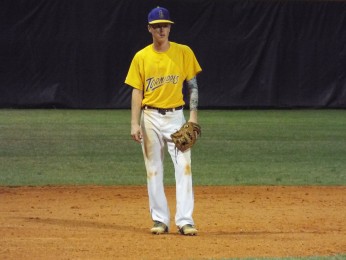 Cody Brown had some highlight-reel defensive plays for the Tornadoes.

Underhill came into the game leading his team in RBIs, but the one he got in the eighth may have never happened if it weren’t for Heller’s play in the top of the inning.

“That was so intense,” Underhill said of Heller’s play. “Our guy made that error, but Ryan picked him up and got that out at home. That just gave us the momentum heading into the last inning and we got that walk-off.”

The Tornadoes have improved every year in the win column under Schmidt, and this was another step towards the bigger goal.

“Its a big win because Lemon Bay is a good ball club,” said Schmidt. “Going back three years when we first started playing them, every game is a battle. They have a good, competitive team. Those are the games you have to be in when you go to the playoffs. It was a big team win.”

As for the Manta Rays and manager Casey Hanrahan, they know they let some opportunities pass them by. But it’s time to move on and get ready for the next one.