Bishop McLaughlin Pulls Out 3A-4 Win Over Carrollwood 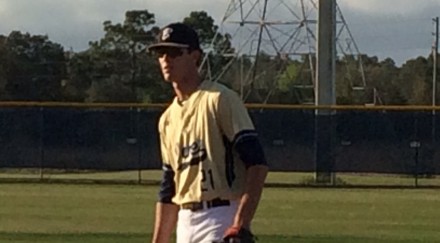 Bishop McLaughlin senior Carson Ragsdale went 2-for-2 and scored the tying run in the Hurricanes' win over Carrollwood Day Spring.

In a battle of 3A-4 unbeaten district teams, the Bishop McLaughlin Hurricanes(9-2) came through for two runs in the bottom of the seventh inning to escape with a 4-3 win over the Carrollwood Day Spring Patriots (8-5) Wednesday night.

Junior left-hander Dominic Diaz was sharp all evening, pitching a complete game to earn the win. Senior first-baseman Carson Ragsdale went 2-for-2 with two walks, getting on base in every at-bat.  He doubled to start the comeback bid in the seventh, and later scored the tying run to put the Hurricanes in position to win.

“That’s the smartest coach we’ve played so far, because they didn’t throw to him very much,”  Hurricanes Manager Jeff Swymer noted about the Patriots’ handling of Ragsdale.  “The middle of our lineup can hit.”

Diaz shut down the Patriots for the first four innings, allowing no hits and only one base runner.  He finally gave up the first two hits, and the first run, to Carrollwood in the fifth.

“I was doing good. It was pretty much three-up-three down the first four innings. I just wanted to keep it going,” said Diaz. He finished the game with ten strikeouts and no walks in the complete game performance.  “This game was good because they had a lot of left-handers.  It definitely helped, locating the off-speed pitches.”

“He’s was getting early outs in the innings,” Swymer said of his pitcher.  “He’s been pitching like that for us all year.”

Carrollwood opened the scoring in the fifth inning.  Sophomore infielder Andre Hevesy led off with a single to left, and later scored on a ground ball by second-baseman Kyle Benedict.

The lead, however, was short-lived, as Bishop McLaughlin came back with a run of their own in the bottom of the inning.  Senior second-baseman Jacob Rodriguez hit a line drive single to right.  Center-fielder Paul Coumoulos then got hit by a pitch, putting runners on first and second.  Next, Ragsdale drew his second walk of the night, loading the bases with one out.  Carrollwood starter Frank Furey then walked Dillon Morton, forcing Rodriguez in from third.

Furey then turned the ball over to Hevesy, who was able to induce two fly ball outs to end the inning, leaving the bases full and the score tied at one. 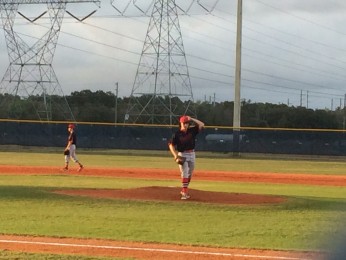 After a one-two-three top of the sixth, Bishop McLaughlin got down to fundamentals.  Third-baseman Keegan Powers walked to start the inning, and Bryce Carroll was brought in to pinch-run.  Zack Berglund then laid down a perfect sacrifice bunt on the third base chalk to move Carroll to second.   Left-fielder Blake Carroll muscled a ground ball to the right side of the infield to move Bryce Carroll to third.  Jacob Rodriguez followed with a clutch two-out RBI single to left to score Caroll.  After six innings, the Hurricanes led 2-1.

Carrollwood stormed back to take the lead in the top of the seventh.  Hevesy started it off with his second base-hit of the night.  Furey then reached on a catchers interference.  Playing some small-ball of their own, Patriots’ left-fielder Zachary Watts dropped a bunt down that Hurrricane pitcher Diaz was unable to handle, loading the bases.  Diaz made up for the miscue moments later, starting a 1-2-3 double play that put runners on second and third with two outs.

With one out left, freshman Kyle Benedict lined the first pitch he saw to the gap in left-center to score Furey and Watts.  Benedict finished 1-for-3 with all three of the Patriots RBI’s.  Suddenly Carrollwood had a 3-2 lead going into the bottom of the seventh.

Starting the bottom of the seventh, Ragsdale blasted a line drive double to right for the Hurricanes putting the tying run in scoring position with no outs.  The Patriots intentionally walked Morton, putting runners on first and second.

Junior Chris Berglund then sacrificed the runners to second and third with one out.  Right-fielder Cam Diaz followed by slapping an RBI single up the middle, scoring Ragsdale and tying the game at three.  Morton moved to third on the hit.  With a runner on third and Keegan Powers at the plate, a fastball got past the catcher and Morton sprinted home, completing the comeback win for the Hurricanes.

“That was a good matchup.  Sometimes you win those and sometimes you don’t,” responded Patriots Manager Nick Rodriguez.  “Their guy threw a gem, and I thought our two guys threw great.  With Furey, there’s just so much movement, it’s hard to call the game.”

Furey, who threw 4.1 innings, struck out three and gave up only one run.  He did, however, throw 94 pitches, prompting Rodriguez to replace him in the fifth.  Reliever Andre Hevesy took the loss for the Patriots.

The victory moves Bishop McLaughlin to 9-2 overall and 7-0 in district play.  Carrollwood Day Spring drops to 8-5 overall, 6-1 in district.