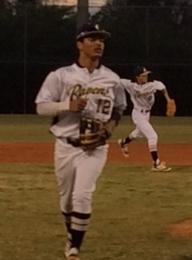 It was business as usual for manager Landy Faedo and his Alonso Ravens Tuesday night, as they jumped out to a big lead and held on to defeat the visiting Palm Harbor University Hurricanes.  The 9-3 district victory was their eighth straight after losing their first three games of the season. Alonso (8-3) also keeps pace with Riverview in the 9A-8 standings with a 3-1 district record.

“He does it all,” Faedo said of Butler, who is also one of Alonso’s top starting pitchers.

Fernandez threw four scoreless innings before giving up an RBI double in the fifth to Hurricanes third baseman Carter Wilson.

“I was kind of starting to get tired, and I realized I was doing something wrong,” Fernandez said about the fifth and sixth innings.  “Toward the end, I was starting to push it.”

With one out in the sixth, Fernandez gave way to Peyton Woble, who finished the game.  The two Alonso pitchers combined for only six strikeouts, with most of the outs coming from outstanding defense.  Woble, who manned third before taking the mound, accounted for four put outs at first early in the game, keeping the Hurricanes (3-4, 1-4) off the board.

“These guys do a great job, and they’re nice kids,” noted Faedo.

Alonso opened the scoring in the bottom of the first inning with a five-run burst that started with Jose Ciccarello being hit by a pitch.  He then stole second, and Jordan Butler singled to center field, plating Ciccarello.  Mike Paule followed with a single to move Butler to third, and Butler then scored on a wild pitch. After a walk to Peyton Woble, Ryan Drumheller and Jared DeSantolo each knocked in a run.

Next, Mason Turner flied out to center, scoring Drumheller with the sac-fly RBI.  After a 34-pitch inning, starter Brian Brown and the Hurricanes found themselves behind 5-0.  Brown, who took the loss, pitched three innings with four strikeouts.  He did not walk a batter. 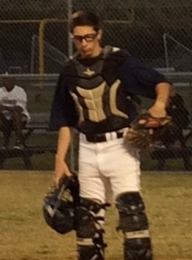 The Hurricanes also committed four errors on routine plays, making it difficult to mount a comeback.

“That’s a good team over there,” Hilbert said of the Ravens.  “You can’t give them extra outs, with the arms they have, and when they hit as well as they do and run as well as they do.  That’s why they only give you three outs in baseball.  The second you give somebody four or five outs, they’re going to put up a crooked number.”

Palm Harbor University was able to mount a rally in the top of the seventh, starting with a walk to Evan DiFrancesco.  Carter Wilson followed with a single, then AJ Hrica walked to load the bases.  Riley Degnan then singled, scoring DiFrancesco and Wilson.  That was as close as they would get though, as Woble struck out the final batter to end the threat.