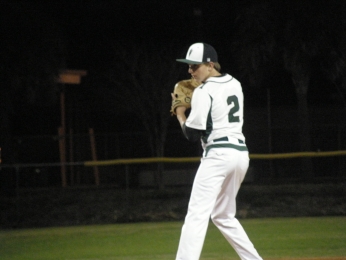 Ian Hislop shutting down Gibbs in the first inning.

With the temperatures down in the mid 40’s and the wind swirling from all directions, it was a hometown showdown between schools separated by just a few miles from each other. On this night it was St. Petersburg getting the best of Gibbs 15-0 with solid pitching, strong bats, and excellent base running.

The Green Devils took down the Gladiators with good pitching over four innings from two young sophomores with no starting experience between the both of them. Ian Hislop pitched the first two innings with a stingy performance giving up just two hits while striking out five. Then it was time for Keegan Galloway to take over for the Green Devils, Galloway was equally impressive striking out four while surrendering a lone single

Gibbs second baseman Bill Baptiste picked up two hits for the the Gladiators roping a single through the middle to start the game off. He would advance to second on a passed ball thrown by Hislop he would advance to third on a a two out single by Cedric Holt. It looked like the Gladiators were on to something but it ended when Holt got thrown out trying to steal second base by the Green Devils catcher Taylor Going for the third out of the inning.

The St. Pete squad did not wait long to get things started when shortstop Keegan Galloway walked on four straight pitches. Galloway ran on the first pitch from the opposing starter James Diaz to swipe second base. He would advance to third on a sacrifice ground ball by first baseman Tad Stockowski. David Rieth roped a single over the short stop’s head to score Galloway from third base for the first run of many to come for the Green Devils.

A hit batter and another single by St. Petersburg would score two more runs in the first inning giving the Green Devils a 3-0 lead.

“We had some good at bats tonight against Gibbs pitching,” said Green Devils Manager Daniel Jones.

The second inning was a seven-run outburst by the St. Petersburg squad after a couple of walks by Diaz. The Green Devils Tad Stockowski made the opposing team pay with a three-run blast over the 30-foot fence in right field.

“I hit a fastball that was left up and out over the plate,” Stockowski said.

A couple of throwing errors and a dropped pop up by the Gibbs infield was to much to overcome in the second inning. St. Petersburg added four more runs in the third inning. One coming from a sacrifice off the bat of Catcher Hudson Livesey.

“We are a young team with very little experience playing together as a team, but I did see some positive things come out of tonight’s match up” said Gibbs Manager Ken Moseley. “I have no doubt we will gel as the season goes along and be a different team by the end of the year.”