Orangewood Christian Holds On To Victory Over IMG Academy 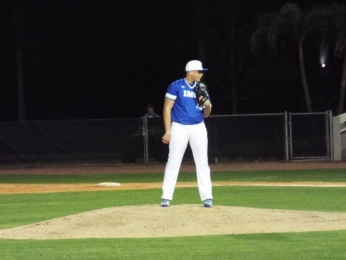 Andrew Meschede prepares to deliver a pitch in the first inning.

Orangewood Christian started strong in the first inning when lead-off batter Michael Spears worked a walk and then stole second before another pitch was thrown. This helped set the tone for the evening as Orangewood amassed eight total stolen bases on the night, en route to a 4-1 victory.

Spears eventually advanced to third on a double by junior third baseman Jeremiah Davis and scored, along with Davis, on a sacrifice hit by shortstop Jake Lefever. Manager Scott Hilinksi spoke about his team after the game and the style of game they play.

“We have to be aggressive,” Hilinski said. “At this level, and at every level really we need to put pressure on the defense, make them make plays, and just really take advantage of mistakes and errors. Every year we have to look at the talent and what you got and you customize your approach. Two years ago we were not small ball we would go up there and hit a few home runs and drop balls into the gap. We are young but we are scrappy and that’s kind of our style. We got a junior that plays center field, Michael Spears, that’s been with us since eighth grade. Guys who have been in our program understand how we like to do things and the younger guys, even if they are similar in age, look up to guys like that. We’ve got good chemistry and good leadership from those guys so we are happy overall.”

Orangewood handed the ball over to righty Echelson in the bottom of the first. After allowing a lead-off single to IMG Academy sophomore TJ Brock, Echelson settled down nicely, turning in two hits over five shutout innings, along with 10 strikeouts. Echelson is one of only a few seniors on a young team and he says he is excited to finally have the opportunity he has in front of him. 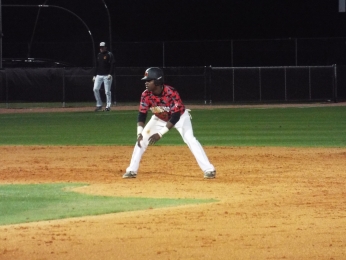 Jeremiah Davis takes big lead before stealing a base.

“It feels really good,” Echelson said. “I’ve been waiting for this year for the past four years and finally worked my way up. I’m glad for the opportunity to get out there and do as well as I did. I’m really blessed with the team that I have and what we do and what we put together. We have great coaches and everything.”

Orangewood (1-0) added two more runs in the third inning after Spears lead off with a triple and was brought in by another Jeremiah Davis double. Davis added a run scored to his stat line to make it 4-0 in favor of the visiting team.

IMG Academy fought until the very end and, in the bottom of the sixth, was able to load the bases and eventually senior Ben Kopriva scored the first run for the Ascenders (0-1). Unfortunately the rally fell short but Raines understands the youth on the team and is very excited for future of the team.

“I like the fact that we were competing and not letting them run away with it,” Raines Jr. said. “We fought back to stay in the game, and I think the main thing with our team early on in the season is that we have been giving teams extra outs. When we give teams extra outs momentum changes and it gives the advantage to the other team and we play on our heels. We have a really young team this year. I’m excited to see how they grow. The first couple weeks we are probably going to have a little struggle trying to get into it because it is the first varsity experience for some of these kids. We are a very young group. A lot of our position players are younger and I think that they are going to grow together, so I think ultimately at the end of the season we are going to be fine.”

Next up for Orangewood Christian is an away game on February 10th against Lyman, where they try to improve their record to 2-0. IMG Academy travels to Sarasota Christian on February 15th, looking for its first win of the season.