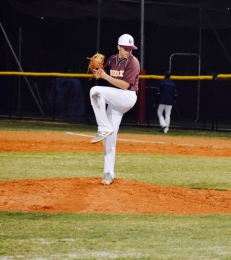 Brandon Traina of Phoenix throws a pitch early in Monday night’s 5-2 loss to the Hurricanes.

With a crisp breeze in the air and sharp play on the field, the Manatee Hurricanes started their 2016 spring season strong Monday night. Precise pitching and excellent base running propelled the Hurricanes to a 5-2 victory over 4A-4 challenger Brooks DeBartolo Colligate High school.

Manatee pitcher Eric Crawford set the tone early with three strike outs in the first two innings, putting his foot on the gas and never letting up. He finished with seven strike outs, three walks, one hit and zero earned runs in six innings.

“I was able to get ahead early in the count that really helped,” Crawford said. “The defense was great too. After a rough preseason they really settled down, which allowed me to find a good grove.”

The defense fielded ground balls and routine pop ups all night long while errors were almost non-existent. Manatee catcher James Cuccio executed beautiful defensive play that was showcased when he picked off a runner trying to steal second early in the third inning.

On the offensive side of the ball, Manatee relied on timely hitting and smart base running to bring home victory. Designated hitter Orlando Ruiz started the fourth inning off with a deep double to left-center field. Garrett Richelieu followed Ruiz’s double with one of his own, sending Ruiz home from second. Richelieu crossed the plate a few plays later, giving the Hurricanes a 2-0 lead. Manatee scored again in the fifth through a double steal move by second baseman Chris Lechman and catcher Cuccio.

“We don’t hit a lot of home runs. We can get some doubles, but we really rely on our base running to put us in the best position,” said Viera. “We try to take every base we can and capitalize on small errors.”

The Brooks DeBartolo Phoenix played the Hurricanes well, holding them to zero runs and only two hits in the first three innings. Offensively, they couldn’t gain traction until later in the game.

“We are a young team, it’s going to take a while for us to settle down,” said Phoenix manager Edwin Leal. “We had good pitching and defense, we just have to get the offense going.”

Defensively, DeBartolo showed strength, particularly through third baseman Johnny Diaz, who delivered a pair of nice plays. In the second, Diaz caught a line drive that would have been an extra base hit for the first out of the inning. Even more impressive in the third, Diaz fielded another line drive and quickly dove to the bag to complete an inning-ending double play, getting the Phoenix out of a jam that left the score tied at zero.

“I was just in the right place at the right time, instinct took over and I dove towards the bag,” said Diaz.

Even though they lost, Brooks Debartolo is keeping their head high and looking forward to evening the score later in the season.

“We play Manatee again late in the season,” said Leal. “That’s the game to keep your eye on. We will be ready for them then.”