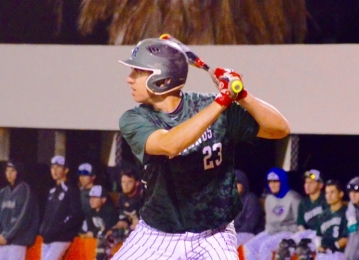 Lakewood Ranch pitcher Colton Zimmering steps up to the plate.

A commanding performance by Lakewood Ranch pitcher Colton Zimmering was the difference in a close district game Friday night in Sarasota. A walk and an error in the fourth was the game-changing moment of the contest as the Mustangs won 2-1 to hand Sarasota it’s first loss of the season.

Lakewood Ranch takes sole possession in 8A-8 with a 2-0 mark, while Sarasota is right on their heels at 1-1 in the district.

Zimmering didn’t make it easy on Sarasota (5-1) giving up only one run on five hits and striking out five in a complete-game effort that earned him his first of the season. With great command the Mustang junior kept his pitch count down, giving his manager the confidence to send him out to finish the game in the seventh.

“We do our part with our starters to make sure that they keep their pitch count down,” Lakewood Manager Ryan Kennedy said. “With the game so close we felt Zimmering deserved it and we sent him out there.”

Zimmering was also proud of his performance pointing to his three go-to pitches as the reason for his success.

“The two seam away, my curve ball, and my slider were working well all night for me and those three pitches really got me through the game,” said Zimmering.

“Our kid threw a good game, giving up two hits in six innings, but an error and a walk scored and we just didn’t execute when we had the chance,” said Sailors Manager Clyde Metcalf.

Both teams also benefited from old-school baseball, grinding out runs and making small plays pay off. Focusing on bunts, stolen bases and advancing runners, each team showed an affluence for the finer points of the game.

Sarasota center fielder Vaun Brown executed a beautiful sacrifice bunt in the third inning to advance Johnny Macci to second; putting him in scoring position. Macci scored the Sailors’ only run two batters later on a single from Alex Arauz.

The Mustangs (5-2) also used small-ball to score their two runs. Kennedy used his teams superb base running skills to steal a total of three bases in the fourth inning alone, allowing outfielders Justin Fischer and Trevor Losada to score the go-ahead runs.

“Coach saw an opportunity and we took it,” Fischer said.

Sarasota attempted a late game rally, putting a runner on in the seventh. But the Sailors’ batters just couldn’t break Zimmering, who pumped his fist into his glove as the defense recorded the last out to seal the victory.