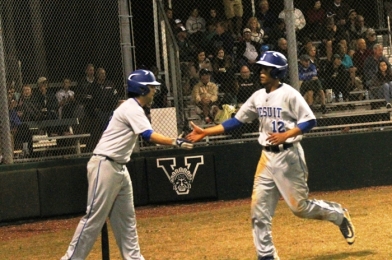 Steven Lugo celebrates with his teammate after he scored in the fifth.

A perfect evening for baseball brought two friendly rivals together to a fantastic atmosphere at Venice High on Friday night, as the Indians hosted Tampa Jesuit. With a packed house and a unique pre-game ceremony that had folks kissing a live pig, followed by two strong programs full of players that all know each other, there was electricity in the air leading up to first pitch.

It is a meeting that both sides look forward to each season, as over the years Jesuit and Venice have played some competitive and exciting games against one another. Knowing the ability of their opposition and the fact that either side is capable of winning any time has helped the two clubs to gain great respect for one another. It also adds fuel to the player’s bellies that makes them want to win that game even more.

Friday night’s contest lived up to the series’ theme. Behind some key hits, strong pitching and a few big plays on defense visiting Jesuit took a 3-0 decision. The victory keeps the Tigers unbeaten on the season with a five-game winning streak to start the 2016 campaign.

“Obviously any time you play Venice, and especially at Venice, you know you are going to get the best of the best,” Tigers Manager Miguel Menendez said. “Coach Faulkner does a great job and I think he is one of the best coaches in Florida. For our guys to come out and perform the way they did shows a lot about who were are and our program. Hopefully we can build off of this and keep going.”

Lefty Michael Sandborn picked up the win on the mound with five scoreless innings of work. Facing a tough Indians lineup the senior southpaw got into a rhythm early and was successful in getting the hitters to swing at his pitches. Sandborn was particularly pleased that he was able to work his changeup for strikes consistently.

“I wasn’t trying to do too much and I know they are good hitters all around,” Sandborn said. “Going in I knew they were fast runners and good bunters, but I trusted my defense behind me and I just executed my pitches. Venice has always been a solid team and we have a couple of our guys that know them and it is always fun competition. Last year was a tough loss; I believe we were up 3-0 going into the seventh and they ended up getting the runs to win it, so it was nice to get it this year.”

Sandborn only struck out three, while scattering four hits and a walk. He excelled at getting the ball put into play and letting his defense do its job. The Jesuit defense proved up to the task by chasing down several hard-hit liners and cleanly fielding numerous grounders.

Second baseman Steven Lugo delivered the biggest play when he leaped up to snare a screamer off the bat of Venice’s Mitch Donofrio to quell a rally bid in the fifth. Colton Fraser had just singled and then stolen second base to spark the Indians with a leadoff man in scoring position, but that momentum quickly shifted directions thanks to Lugo’s big catch.

“It’s something where I have just always had that ability to jump and make those kind of catches,” Lugo said.

Lugo’s biggest contribution on the night came at the plate in his first at bat. Leadoff batter Nick Ortega drove a shot deep to center field to start things off with a double against Venice starter Trevor Holloway. Lugo came up next and lined the ball just fair along the right field line to allow Ortega to come in for all the run support the Tigers’ pitching staff would ultimately need. 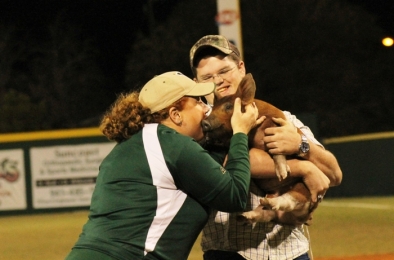 A Venice representative kisses the pig during pregame festivities.

“Ortega has just been hot all year getting on base, and I think he has one of the highest batting averages in the country,” Lugo said. “So, for him to get on like that, it just set me up perfect. I was just trying to be aggressive and help my team score some runs.”

Holloway settled in and found his groove to put in a quality start in his four innings of work. The right-hander struck out eight while allowing three hits and three walks.

Jesuit struck again in the fifth, as Lugo and Nick Baldor both walked and Braxton Rupp reached on an error that loaded the bases. Lugo came home on a passed ball and Garrett Sheppard later drew a bases-loaded walk to send in Baldor.