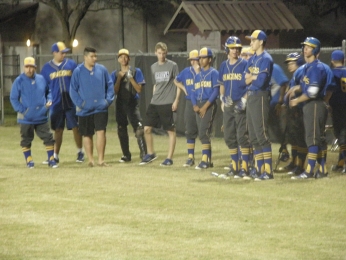 Jefferson pitching was on display Tuesday in a 6A-8 game between two teams without a victory as of early Tuesday night in Tampa. That would change for the Jefferson Dragons after a display of young arms on a mission to take down district foe Middleton.

The Dragons (1-2, 1-1) slammed the door on a Middleton offense that just couldn’t find the hits to keep up against the hot-swinging Jefferson bats. Matt Gaffney was the first to shut Middleton down with a mixture of lightning fastballs and change ups and a breaking ball that was showing no mercy on the Tigers through the first three innings.

“We are a young team having lost all of our veterans to graduation this past year,” said Dragons Manager Juan Fontella. “We are throwing freshman and sophomore out on the mound this year.”

By then the damage needed for this win had already been done with Jefferson plating the first two runs on a combination of well-placed hits and base running. Anthony Perez got things started with a sharp single to right-center field, and he quickly stole second base and then moved to third base when right fielder Jake Coleman stroked a single to left field. Michael Dominguez sent Perez home on a ground out to third base to score in the second. Jefferson added a run in the third inning on an error by the Tigers infield.

Andrew Ortiz came in for the Dragons in the fourth inning to replace Gaffney. Ortiz stuck out three batters in a row after Gaffney surrendered the lone run for Middleton (0-3, 0-2) on the night.

Tigers starting pitcher James Carter had his fastball working early on but with his defense unable to consistently make plays behind him Carter was throwing too many pitches to get out of the inning. Middleton bats were silent except for one lone hit by third baseman Jakob Haynes. The Tigers would have runners on base from the walks surrendered by the Dragons pitching, but were unable to plate more than the one run in the fourth inning.

The Dragons swiped six bases on the night to go along with 13 hits.The fourth inning Jefferson was able to score three runs as the Tigers defense committed three errors. Jefferson took advantage of the mistakes that plagued the Middleton team throughout the game.

“We are a young team looking for our identity,” said Tigers Manager Ken Myers.

The seventh inning Jefferson could do nothing wrong, plating seven runs on seven hits and two walks to keep the Middleton defense working. They started off the seventh with a double from left fielder Andrew Mathis. He scored on a triple from center fielder Robby Martin ,who had a great night at the plate in going 3-for-4 with an RBI, stolen base and three runs. The Dragons added five more runs in the inning.