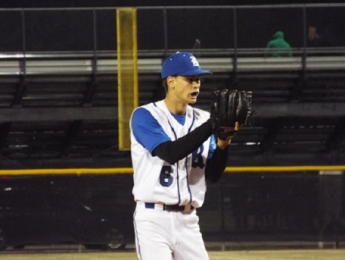 A showdown between two of the top teams of 8A-6 occurred Thursday night between the Riverview Sharks and the visiting Bloomingdale Bulls, and it certainly lived up to the hype. From the start, the crowd was electric and both dugouts were loud in support of their teammates. Cool temperatures and lights-out pitching from both squads limited the offenses the entire night. It was the Sharks who broke through in the fourth to secure the narrow 2-0 victory in this all-important district game.

The Sharks (4-3, 3-1) came into this game having lost their previous two outings, and they were looking to get back on track at a home venue where they are undefeated and have outscored their opponents 18-6. Jordan Leasure took to the mound for the Sharks in his second start of the season and set the tone early in the pitching duel. Leasure sent down the first two batters of the first by way of the strikeout, something he accomplished six more times throughout the night.

Senior right-hander Carson Crouse started the game for the Bulls (4-2, 2-2) and had an equally impressive start to his outing. Through the first three innings, Crouse only allowed one hit, a blistering double from Sharks slugger Anthony Gonnella, which resulted in no runs scored for the Sharks. Crouse struck out five batters over the course of those three innings, with three of the strikeouts coming in the bottom of the third.

Catcher Garrett Thompson got things going for the Sharks in the bottom of the fourth. Thompson took a 1-0 pitch and sent a ball past the infield and into left field for a single. Zach Stenback came in to courtesy run for Thompson and the next batter, junior Darius Stribling, took a 2-0 pitch over the plate and sent a rocket over the left field fence. The home run gave the Sharks a 2-0 advantage, a lead that they did not relinquish. 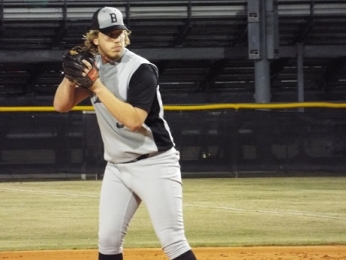 After he was given a lead, Leasure pitched two more innings before leaving the game at the start the seventh inning. There were only a few instances where the Bulls put a lot of pressure on Leasure. In the top of the fourth, the Bulls had runners at second and third with just one out and were threatening to take the lead, but Leasure was cool under pressure and induced a ground-ball out followed by a strikeout to get out of the jam. When praised after the game for his composure and confidence, Leasure was quick to respond.

“I have 100 percent trust in my defense,” Leasure said. “I know if I put one over the plate and they hit it hard, someone is going to be there to pick me up. I’m just not scared to go out there and throw to those guys in those situations.”

Riverview Manager Bill Leiby spoke about his starter with a lot of excitement with what he has done and what he could do for his team in his senior year.

“He’s good,” said Leiby. “His work ethic is just unbelievable, how he got after it this summer and through the fall. He can locate in and out, hes got a good slider, and he started throwing the change-up late in sixth inning. Hes got the ability to pitch at a high level.”

There wasn’t any better example of Leasure’s work ethic than after the team celebrated their big win. He was out running laps around the ballpark getting ready for his next start. 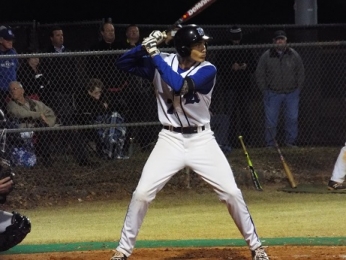 Freddy Tarnok at the plate before he came in the pick up the save.

Leasure’s night ended after six innings pitched, allowing no runs and striking out eight. Junior Freddy Tarnok took over for Leasure in the seventh to close out the game. Tarnok came into the game and struck out the first batter he faced. After allowing the next batter to reach on a single, Tarnok induced a 6-3 double play to end the game and secure the victory for Riverview.

The win keeps the Sharks undefeated at home, but more importantly gives them their third district win of the season. With three straight district games looming on the schedule, no one is more confident his team can succeed than its manager, Leiby.

“We were battling so hard for the first two or three weeks with injuries and sickness,” said Leiby. “We are just now getting healthy and able to set a pitching rotation and get going, so its been kind of a grind for us and the kids playing sick and playing injured. Now that everybody is looking to be 100% I think good things are going to come.”