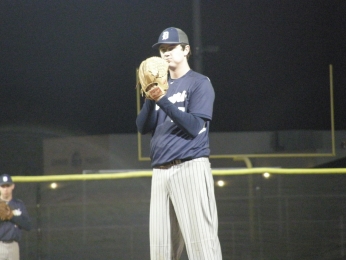 Zack Barfield 2-for-3 at the plate and struck out five Hawks on the mound.

On a cold and windy night in Tampa Bay the Durant Cougars’ bats were on fire, plating seven runs on 12 hits to lead the way to a 7-1 win over Armwood on Thursday. The Cougars pitching kept the Hawks from getting any kind of rally going, giving up five hits and one run on the night.

“We could not get anything to go our way tonight,” said Hawks Manager Rob Woodke. “Their pitching was very good tonight.”

Durant pitching was very stingy on the Hawks’ bats, giving up only five hits. Right-handed pitcher Zack Barfield had a good night on the mound in giving up one hit while striking out five over the last three innings for the Cougars.

“It was a complete game for us tonight,” said Manager Durant Manager Butch Valdes.

Durant (4-1) started things early with a leadoff single by shortstop Jonathan Herman in the first inning. Herman stole second base and scored on an RBI single by first baseman Zack Barfield. Center fielder Jonah Solaro scored the second run on a wild pitch.

Durant pitcher Brien Johnston set Armwood down in order in the top of the first. Johnson used a mix of well-placed fastballs and a good curveball to keep the Hawks off balance for four innings.

Durant sent 10 batters to the plate in the top of the third inning. Solaro started the the inning off with a single to left field. Then it was third baseman Jake Sullivan who put down a beautiful bunt to sacrifice Scolaro to third base. Scolaro scored his second run of the game on a wild pitch and Sullivan quickly followed on a RBI single by left fielder Harrison Theocharakis. The second wild pitch of the inning allowed Theocharakis to tally the third run of the inning. Durant scored two more runs in the third for a total of five runs on five hits.

The Hawks (1-5) scored their lone run in the second inning when center fielder Jake West led off with a double deep to center field. West stole third base and scored on a sac bunt by third baseman Austin Hatfield. That was it for the Hawks scoring on the night as Durant pitchers remained steady for the remainder of the game.