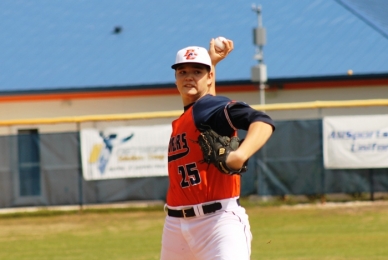 Right-hander Austin Kessler had a quality start for the Panthers.

The last time these two teams met the result was the same as the rest had been, a lopsided victory for Bradenton Christian. This friendly series had always gone the same way in the win column, but on Saturday that finally changed. Behind a spirited defensive effort and just enough offense the HEAT earned a 2-1 victory over host Bradenton Christian.

“We have played these guys like four or five times in the last two years and we haven’t even come close to beating them,” HEAT Manager Hank Marino admitted. “So I just told these guys, ‘play good defense, timely hitting and smart baseball and we’ll have a competitive game’, and that’s what they did. I’m proud off them; this is probably one of the best defensive games this team has played in three years. It was well-deserved.”

Both pitchers were in control and keeping runs off the scoreboard the first time through the lineup. Starting pitcher Adam Masarik got the start and the win with four shutout frames, as he gave up two hits and two walks and struck out five. Brandenton Christian starter Austin Kessler was perfect the first time through the order and he lasted until there were two outs in the sixth. Kessler took the loss despite allowing no earned runs, with six strikeouts against two hits and a walk.

“Kessler did an awesome job,” Panthers manager Jeff Perkins said. “I think he was in the 85-pitch range in the sixth, which was very nice. He threw strikes and let us make plays. Unfortunately we just couldn’t back him up with the bat.”

By scoring in the fourth to take the lead The HEAT (3-2) also ended a 13-inning scoreless streak that dated back over the past four meeting in the series. Masarik ripped a single up the middle just past the reach of diving second baseman Rob Arakel. A stolen base put Masarik in scoring position and an infield error brought him home for the 1-0 advantage. 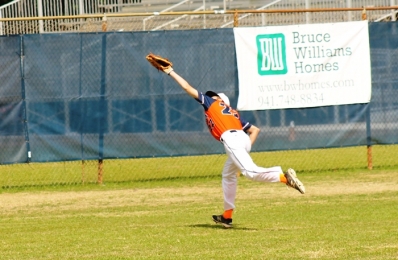 Masarik’s hit came at an opportune moment that brought the momentum back to the HEAT’s side. In the previous at bat Panthers left fielder Owen Thomas made a nice running grab to rob a hit from the HEAT’s Ian Hunniford. Defense was certainly the theme for both sides, as each team made several nice plays.

For the HEAT those plays came at big moments that helped lead to the victory. Panthers’ shortstop Matt DiLorenzo had a nice glove on several putouts, the biggest coming with a runner in scoring position that ended the bottom of the second. Bradenton Christian catcher Noah Henry tracked down two foul pops, including one that recorded the first out in the seventh on a catch that carried Henry hard into the sideline fence.

Michael Wilson doubled the lead with an insurance run in sixth. The centerfielder sent a two-out single up the middle, stole second and then scored following a pair of passed balls.

Down to their final out and at the bottom of the order, Bradenton Christian made one final push. Thomas walked, stole second and moved to third on a throwing error. Leadoff hitter Josh Ramsey plunked an RBI single over the head of leaping second baseman Ian Hunniford to cut the deficit in half. But the HEAT had one final play in them as DiLorenzo hauled in a line-drive to end the contest.

“They made a run,” Perkins said. “They have a little competitive nature about them. The problem is that we cannot wait until so late. If we had brought that same intensity in the first, second and third innings I think it would have been a different outcome.”

The Panthers fall to 1-4 so far, after getting their first win on Friday night. It is a roster full of young players, all of whom are still getting their feet wet at the varsity level. Now the question is simply about how the guys will work at practice and respond to the challenges they have faced so far.

“There’s two ways to go,” Perkins said. “We’re young and we might be struggling right now, but you can either dig yourself deeper in a hole or you can climb out of it and keep progressing.”