Braden River scored three runs in the top of the seventh inning to cap a big comeback, then held off Tampa Tech for a narrow 7-6 victory. The win gives the Pirates an early leg up in District 7A-9, while providing a glimpse at just how tight and competitive the district games figure to be.

The seventh inning would find the score tied at four runs apiece.

Braden River struck in the top half of the seventh when third baseman Tyler Dyson started the inning off with a line drive into right center for a leadoff single. He advanced on an error and a wild pitch and scored on an error by the Titans infield. John beam put a bunt down to sacrifice another run across the plate. The pirates scored their third run of the inning on a single by third base man Andre Fonseca.

“We have a young team playing in our infield,” said Manager Craig Page. “We will get better with more time on the diamond.”

Braden River (2-1, 1-0) grabbed the lead in the second inning on a base hit by center fielder John Bean, who quickly stole second base and then advanced on a well-placed sacrifice bunt by third baseman Andre Fonseca.

The Pirates plated a second run in the third inning with a single from first baseman Cole Pencosky. He quickly advanced to second when catcher Hunter Thomas reached on an error. After a double steal Pencosky scored on a fielders choice by Pirates second baseman Brian Dillingham. 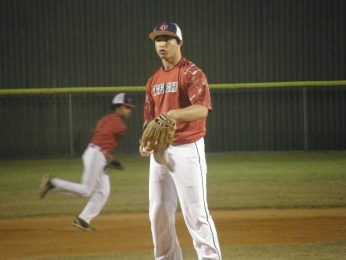 Tampa Bay Tech (0-2, 0-1) did not wait long to back in this game by plating four runs in the third inning. Shortstop Freddie Drayton walked, quickly stole second base and then advanced to third on a sacrifice ground out by second baseman Malcolm Boyd. Drayton scored on a RBI double by center fielder Jaisen Randolph, who quickly scored on a RBI double by the Titans starting pitcher Jarid Salisbury.

Salisbury advanced to third on a fielders choice and quickly scored on an error. They added one more run when catcher James Ewers scored on another error by the Pirates infield. That put Tampa Bay Tech up 4-2 heading into the fourth inning.

Salisbury was throwing hard the entire game and he had his way with Braden River in the fourth inning, getting consecutive ground outs and a called third strike to finish the inning. The Pirates starting pitcher Eric Kimsey shut the Titans down with solid pitching and great defense in the fourth and fifth inning as Tech couldn’t get anything going in either frame.

“We were able to use the bunt several times to our advantage,” said Titans Manager Demetrius Heath. ” We were also able to run on the base paths pretty well also.”

Tampa Bay Tech would try to come back from three down but was able to come up with two runs to finish this exciting game.