Written by Anthony Uttariello on May 17th, 2014 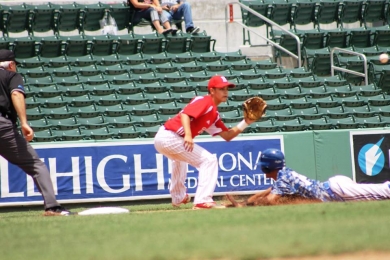 The Bulls had their hands full with the Cobras base-stealers, but were able to keep them all from scoring.

Park Vista came close on Friday afternoon to making the 8A championship game an all South Florida affair. With South Dade winning earlier in the day, a Park Vista win would have guaranteed a champion from South Florida. Instead, the Cobras were unable to solve Bloomingdale’s Logan Crouse, and Park Vista’s storybook season came to an end with a 1-0, eight-inning semifinal loss.

“It seems like it was a year ago that we started this thing,” said Park Vista Manager Larry Greenstein. “Actually, it started back when they were all sophomores, that’s what makes it tough. The effort that these guys all put forth to get here is amazing. I commend our guys for just staying the course all year, and at the end they were all on that bus, and we fell just one game short.”

As has been the case with most of the games at the state tournament through the first week, pitching dominated on this day. Crouse threw eight innings of shutout ball at the Cobras, while Park Vista starter Austin Smith was nearly as good. Neither pitcher allowed a run in the first seven innings of the game.

Bloomingdale scored the winning run with a one-out walk, a stolen base, and an RBI single up the middle off the bat of Conrado Skepple.

For Smith, the outcome was bittersweet, as he knew he did his part on the mound. Smith gave up only six hits, and wiggled his way out of several early jams to protect the shutout and keep Park Vista in the game.

“I felt like I was filling it up good, throwing strikes,” said Smith. “I was pitching my heart out, doing my best.”

Offensively the Cobras had a couple of chances to break through against Crouse. Matthew Mika, Park Vista’s lead-off hitter, was in the middle of all of the scoring opportunities. In the first inning, Mika led off the game with a single, stole second, and moved to third on a ground out to short. That, however, was where he would be stranded after Crouse induced a ground ball off the bat of Joe Genord. 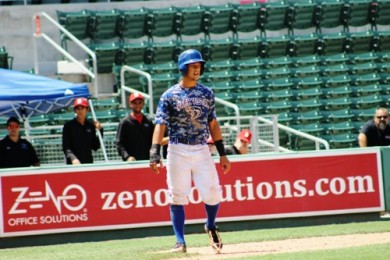 Matthew Mika was starnded at third base three times in the game.

In the third inning, with two outs, Mika doubled to left and promptly stole third. Crouse again worked out of the jam by getting Tyler Barre to ground to third. Ground balls to the left side of the infield was a theme all day for Park Vista, as Cobra batters had over ten ground outs to the left side in the game.

“He did a great job against us,” said Mika, who had three of the Cobras’ four hits. “His slider was working real well, and we just couldn’t figure him out.”

In the eighth, Mika tried one last time to get something started, hitting a one-out double. Dakota Julylia and Barre stranded Mika with consecutive ground outs, to second and short, respectively.

When the Bulls scored in their half of the eighth, the Cobras were left to reflect on what could have been.