American Falls 6-0 To Durant In Class 8A State Semifinal 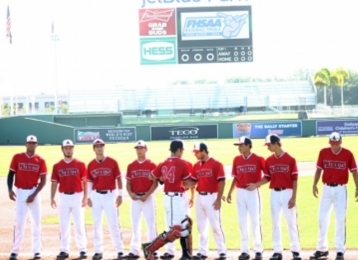 American players prepare to take the field for the school’s second state semifinal in school history.

Ricky Gutierrez knew what a special moment this was for his players.

As a former Major League ballplayer, the American Patriots manager knows a thing or two about capturing memories that will last a lifetime.

Although his team trailed by several runs and they were facing a dominant pitcher in Durant starter Tyler Danish, Coach Gutierrez elected to go away from his starter late in the contest to let some of his seniors get a chance to pitch in the big game.

Durant added another pair of runs to eventually pull away with the 6-0 victory in Friday’s Class 8A state semifinal.

However, Gutierrez was satisfied to know he was able to reward some of his seniors by getting them a chance to pitch on the grand stage of the state tournament in the beautiful ballpark that is jetBlue Park in Fort Myers.

“The way their pitcher was going being down 4-0 felt like being down 10-0, so I felt it was a good time to show my respect for some of the seniors on my club in that last inning,” Coach Gutierrez said. “That was why I kept bringing them in. They earned it; they helped get us here.”

Although the Cougars (25-5) took this as a sign that the team had conceded, Gutierrez knew that it was the best way he could thank some of the players who had helped get him this far. So he made sure to let them get a taste of the action and take those memories with them for the rest of their lives.

In the top of the seventh inning seniors William Penelas, Samuel Candanoza and Andy Gonzalez each came in for a turn in recording an out apiece in the frame.

Whether or not any of those pitchers gave up any runs, Coach Gutierrez was pleased to know that they were given a chance to play in the biggest game of their lives.

“We’re a team who has come back from a deficit before, but the way their guy was on the mound made it tough,” Coach Gutierrez said. “He is the real deal and there’s not much more to say about it. He didn’t walk anybody and it was tough to get people on base. If you can’t get people on base, you can’t score.” 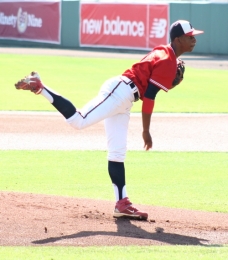 Danish (14-1) had been described to the Patriots skipper as a freak of nature on every scouting report he found in preparing for the game. He certainly lived up to that hype. The senior right-hander went the distance while allowing just one hit and recording nine strikeouts against just one walk.

“Tyler Danish was basically a one-man show. He did it all,” said Coach Gutierrez. “The rest of the team doesn’t really have to do much when you have a Superman like him on the mound. He’s something special and he has a bright future. He’s probably the best I’ve seen in high school in a while. Pretty much, he is just a freak, and he showed it today.”

The Patriots (21-9) were one of the most prolific offenses in Miami-Dade County this season, more than capable of scoring runs and also capable of coming back against most any talented pitchers.

Danish was not one of them.

“My guys have a pretty good idea how to hit. But like I always say, pitching always makes hitting look bad,” Coach Gutierrez said. “It doesn’t matter what kind of offense you have; if you have a guy who is dominant like him he can make your offense look real bad. You can’t go out there taking pitches because he throws strikes. You just look for one pitch and hopefully you hit it.”

Senior first baseman Kendrick Gutierrez managed to help the Patriots avoid the no-hitter by lining the first pitch he saw in the fourth inning into center field for a two-out single.

“His ball was breaking in towards the hitter, and we were just trying to put it in play,” Kendrick Gutierrez said. “I was trying to fight any way I could so my team could bring me in some way. I was just trying to keep my team up and lead by example, to show them what we have to do to get to the next level and fight at the plate. If you’re going to go down, go down swinging.”

American starting pitcher Ronnie Williams drew the team’s only walk to follow their star first baseman onto the bases, but both would be stranded as Danish escaped the threat with a swinging strikeout.

The Patriots could not manage another baserunner the rest of the way.

Durant put runners on base in each of the first two innings, but each time the Patriots found ways to get out of the jam. Right fielder Kris Perez had a nice catch and throw-out to first base for an F9-3 double-play in the first, and Williams picked off a runner at first to end the second inning.

Making the start to counter a stud like Danish is a tall order for any pitcher, yet Williams was ready to answer the call and give his team the performance they needed to stay in this fight.

“I had to concentrate more. I had to throw first-pitch strikes, hit my spots and make sure I executed every pitch that the coach called,” said Williams. “My coaches taught me earlier in the season to keep my composure no matter what happens on the mound. I knew no matter what we can always come back.”

It was Danish who got to Williams first to stake himself with all the run support the Cougars would ultimately need. Williams let an inside fastball run too high inside, and Danish jumped on it and sent it sailing high and deep over the Green Monster in left field for a towering two-run home run that would have left most any Major League ball park.

It was Danish’s ninth home run of the season, but one that he said was the biggest he has ever hit. 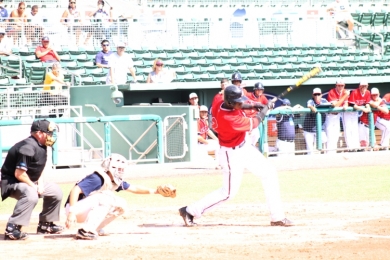 Once the offense was awakened, Durant began to pound away to pad its lead and head towards the victory that pushes them into Saturday night’s Class 8A state championship game against Lake Brantley.

The Cougars pounded out 12 hits, as every starter reached base while they put runners on in every inning.

“Tyler came in and did his job like he’s supposed to; and the boys started swinging the bats,” Durant Manager Butch Valdis said. “We knew American had big bats, but we knew they had not seen Tyler. Once we found a groove it was kind of on from there.”

Danish understands how teams can focus on his laurels and call him a one-man show, especially after he went 3-for-4 at the plate to compliment his pitching performance. The standout ace also understands and acknowledges that it is simply not the case.

“I didn’t have 12 hits today and I didn’t score six runs,” Danish said. “These guys did what they had to do at the plate. It’s all nine of us. It’s not a one-man show at all. It may seem like it, and people may say it, but it’s not. They do a great job of playing behind me and just do a great job of playing as a team together. That’s what we are, one family, but not a one-man show. The chemistry is up and everyone in the dugout is excited to be here. We couldn’t ask for anything better than how we played today.”

The Cougars were particularly strong when hitting with runners in scoring position, which is something the team has stressed all season.

“Every time we have a man in scoring position, our coach always tells us to do your job,” right fielder Paxton Sims said. “Whether its one out hitting a ground ball to second base and getting the run in, or two outs and you actually have to get a base hit, you’ve just got to do whatever you have to do to get that run in.”